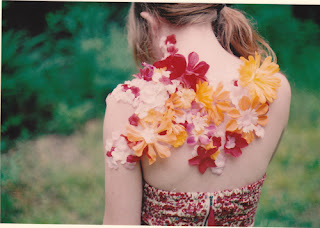 Angelica is also available on twitter (@angelicadawson) and on facebook. Please help me be a dual genre success rather than failure! :D

Note: this will be the only time I mention Angelica Dawson by name on this blog.
Posted by Kimberly Gould at 11:59 AM 1 comment:

I have a problem. For some of you, the fact that I write erotica might come as a surprise (hopefully not a shock). What came as a shock to me, was that my over-the-top, balls-to-the-walls, Bloody, Foul and DIRTY vampire erotica, Blue Moon House was accepted when submitted to Naughty Nights Press. While this blog and this post is suitable for all ages, that link is NOT. It will warn you. This story, Blue Moon House, is not suitable for all ages either. For some, it won't be suitable at any age. It has all manner of kink in it.

Who would suggest that?! Why my acquaintances who have published erotic fiction, of course! I beta-read D. F. Krieger's Sail My Oceans (which you should click on and buy!) and Elicia Seawell, although not currently publishing erotica, was not afraid to suggest Naughty Nights to me. So, I took a chance. I sent Blue Moon House first to Evernight and then to Naughty Nights. The first said no, citing the "forced sex, fecal and blood play" which, of course, I included up front in my query letter. I expected the second would also reject me, fairly quickly, so I was bowled over on Friday when I got an acceptance letter complete with contract.

I had been so sure no one would want this. I had been convinced that Blue Moon House would lie unnoticed with the rest of the Original Fiction on My Vamp Fiction (just looking through the category, 3 reviews seems to be the maximum). Instead, I'm being offered the chance to publish and promote it. So, do I, author of Cargon: Honour & Privilege, a book geared to young adults, want to divide my efforts and cross-promote erotica under a pseudonym? I also have a few conflicts with the contract, so I might be saved making the decision that way, but it is still a question I need to deal with.

I have to say, looking at the stack of cons, I'm not sure I can grasp enough pros. The big one would be market share. There are a LOT of erotica readers online. Way more than young adults who are willing to try post-apoc renaissance. Is it possible to hook a reader through porn and convince them to try my non-erotic fiction? This is a HUGE stretch in the case of Cargon, but my second novel, Thickness of Blood, is an adult story with adult themes. A reader who could indulge in Blue Moon House is more likely to enjoy following George as he tracks down his daughter's rapist than someone who felt at home in Fontive with Eve, Adam and Louis.

Before I was published for young adults, I delved into a lot of genres, tried a lot of different styles, and some suited me. Some, I think, made excellent stories that I would NEVER recommend to a young adult. Should I keep my eggs in one basket? Or should I launch those other stories and reap a wider audience? Should I stop with Thickness of Blood and keep my toes out of erotica? I haven't made up my mind yet and would love any and all advice.
Posted by Kimberly Gould at 9:08 PM 2 comments: